How to Perform a Wedding: The Right Way 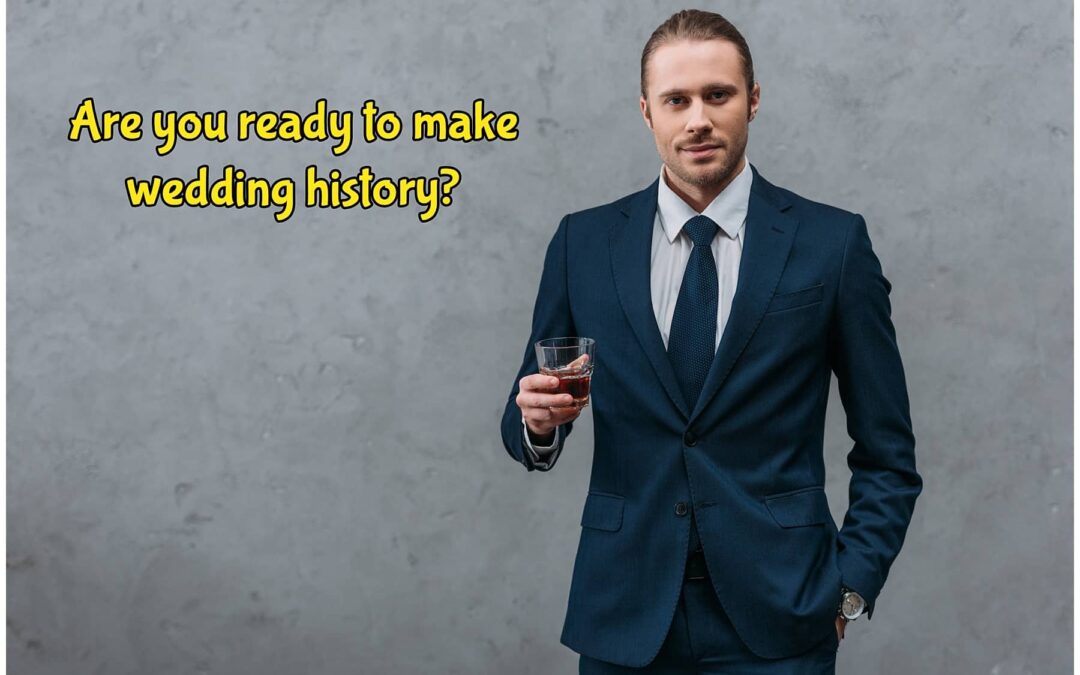 This guide will show you how to perform a wedding.

(In other words, no need to rely on books or other rambling fluff articles.)

So let’s get started…

This first section is all about the script.

What is a ceremony script?

If you’re brand new to the whole wedding world, here’s what you’re looking for:  a wedding script should contain all of the wording spoken at the ceremony by the wedding officiant and the words, if any, said by the wedding couple.

When looking for a ceremony, no need to reinvent the wheel, find something simple.

But you gotta pick one and please don’t agonize.  This should be the easiest part.  I suggest picking one of my 7 favorites here:

The 7 Most Beautiful Wedding Ceremony Scripts…Ever

Really the only important question you need to ask yourself at this stage is whether the couple wants religious or not.  When in doubt, find a non-religious ceremony.  But the couple will probably have strong feelings one way or the other.  So just ask.

Once you pick a script, send it to the couple.  They probably won’t read it all and will probably be cool with almost anything you send them.

Once you get approval, it’s game on.

Things to avoid when picking a ceremony:

You’ve picked the script. Now you have to…

2. Learn the Script (The Most Important Part)

By that I mean, get familiar with it.  If I had to put a number on it, I would say this should take up 2-3 hours of your life.
(WARNING: This is where I advise you not to get overwhelmed.  Seriously, there is so much crap and so many freaking articles written about a bunch of “essential wedding stuff” that doesn’t really matter.  I mean there are literally 18,000 articles of ceremony do’s and don’ts that are, quite frankly, just baloney and nonsense.  They’re another way to convince you that every wedding should be serious, confusing and stressful.  While I love Martha more than is probably acceptable from a married man, but here’s a sample of the crap out there – Wedding Crap.) 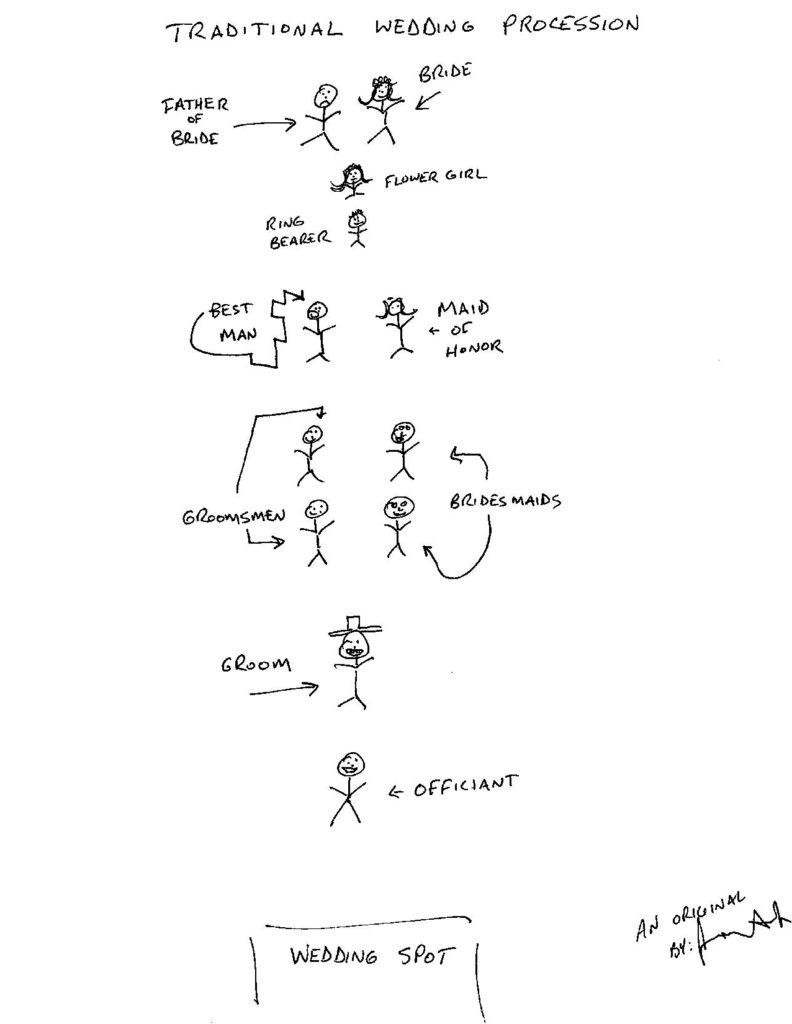 Your ceremony should be broken down in sections.  Usually it looks something like this:

It looks worse than it is.

Here’s the secret to crushing the wedding:

Treat your wedding ceremony like the script for a play.

There are 2 parts to learning your part in a script.

If you’ve ever participated in community theater, you have to learn 2 things: 1.) Blocking 2.) Your lines.

Applied to a wedding, blocking becomes the logistics – like where you stand and any movements you make during the ceremony.

First learn the logistics.  Learn the minimum – just enough to understand how things are supposed to look at the wedding.

There are 3 parts in a wedding that matter:

This is the order in which people walk into the venue.  And where they stand once they reach the altar (or ceremony spot).

All you’ll need to worry about is when you walk in and where are you going to stand for the ceremony.

In the vast majority of church weddings the minister or officiant stands just behind and between the bride and groom.  In most other venues, I stand off to the side and in front of the wedding party.  There are a couple reasons for this: 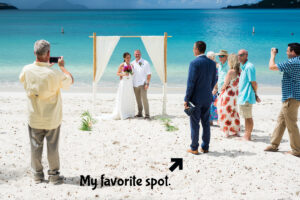 Here’s what I mean:

For the rings, you’ll need to know who is holding the rings and how you want to have them handled during the ring exchange. 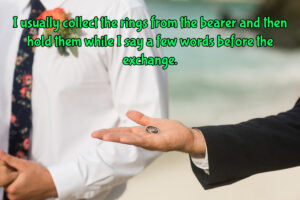 For example, I have the ring bearer bring the rings to me while holding the rings in my hand while I explain the significance of the rings.  I then have the groom take the bride’s ring, instruct him to place it on her finger, and then speak the words from the script.

Your wedding wording might script this out, or you can decide ahead of time how you want to do it.

During the ring exchange I typically step aside so that the photographer can get clean pictures without me in the background.

Here’s some more words from me on performing a wedding:

3. The Kiss and Pronouncement

If you are standing behind and between the couple for the ceremony, as soon as you utter the magic words, “you may kiss your bride”, you’ll want to step to your side a few feet.  Again, this is so that you aren’t in the picture when the couple kisses for the first time as husband and wife. (Imagine the photographer capturing that monumental kiss when at that critical moment you have some goofy looking grin that ruins the whole photo.)

Also, after the kiss, I like to walk directly in front of the wedding party and stand before the audience to make the grand pronouncement of “Introducing for the first time…”.

That’s all you really need to know about the blocking/logistics of a wedding.  But being aware and comfortable of these few items make the whole ceremony look beautiful and smooth.

Learning your lines is THE MOST IMPORTANT part of performing a ceremony.

You can pretty much skip over every other piece of this article and every other article ever written and put your focus on learning your ceremony and you’ll do better than 88.7% of the ministers of the world.

Here’s how to do it step-by-step.

I’m also going to assume you have 48 hours to pull this off.

1. Print off a copy of your ceremony.  Make this the final ceremony copy.  Meaning this will be the exact sheets of paper you’ll use at the wedding.  This is a good idea because you’ll be accustomed to the layout and what’s on each page.  And it will have your notes.
(If you want to go nuts and learn your lines like a pro, try this: How to Memorize Lines Fast.)

2. Read your ceremony all the way through out loud.  As you read, make a note of any sections that you fumble on.  Also, be on the look out for errors.  A lot of online ceremonies have grammatical or other mistakes.

3. Write in personal information on the script.  Add the bride and groom’s name where applicable.  It is not as rare as you think that ministers and officiants forget or incorrectly state the bride or groom’s name.

Finally write down verbatim how you are going to announce the couple’s name during the pronouncement, “Introducing for the first time as husband and wife, Mr. and Mrs. Thomas Cruise”.

3. Memorize your opening remarks and closing remarks.  This is a huge part of excelling and performing one of the best ceremonies possible.  I recommend memorization so that you can open and close the wedding by looking at the couple and the guests instead of the script.

The effect is powerful and noticed by those in attendance.

4. Read the entire script start to finish at least 5-6 times.  This should be enough to get you familiar with the flow and will allow you to look up periodically during the ceremony.

A key to your delivery will be looking at the couple and the audience when delivering the performance. 🙂

Perform the Ceremony (another couple of ceremony secrets)

Like all great performances, the end result is largely a result of the time you put in. 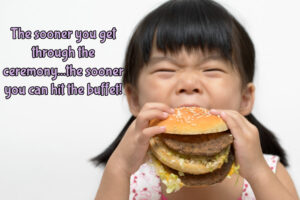 So I’ll assume you’ve followed the steps laid out above when it comes to learning the script.

I mean, this is really where your delivery is key.  If you’ve ever had to give a speech, you know that standing at a lectern and reading just doesn’t fly.

And using some basic delivery skills will ensure your voice isn’t monotone and melodically suited for putting the audience to sleep.
(Without getting too deep into the process, if you can search online for tons of resources on how to project your voice and other presenting skills.)

Remember, this is a joyous and happy occasion.  People will take their cues from you.  Give them permission to have fun!

1. Engage with the crowd directly

Before and during the ceremony, don’t be shy about speaking directly to a family member or friend in the audience or the whole group.

During your welcoming remarks, say hi to different people, engage them in some idle banter.

During the ceremony, you could stop mid-sentence and say something like, “can we all just stop for a second and agree that it’s about time these two did this?!”.  Again, don’t go crazy with it or get silly, but something tasteful and fun is always welcome.

If something funny or awkward happens (something always does) throw a quick one-liner in there.  For example, if the bride is having a hard time putting the ring on the groom’s finger you could say something as simple as, “guess someone’s retaining water” or “jam that thing on, love hurts!” or anything mildly cute.

When you’re able to cut into the ceremony with a fun quip, it breaks the tension or can ease the nerves of the couple.

Eye contact and smiles are going to be 2 of your best tools.  Smiling at the couple and at the audience.  Too many wedding officiants use a somber and serious tone that often goes against the fun and exciting event taking place.

If you want to get inspiration on how to speak effectively and engage an audience, watch a few of these Ted Talks.  You may have seen some of these speeches before.  But try watching again and see if there is anything you can steal to help you deliver an engaging ceremony.

Alright, that’s about it.